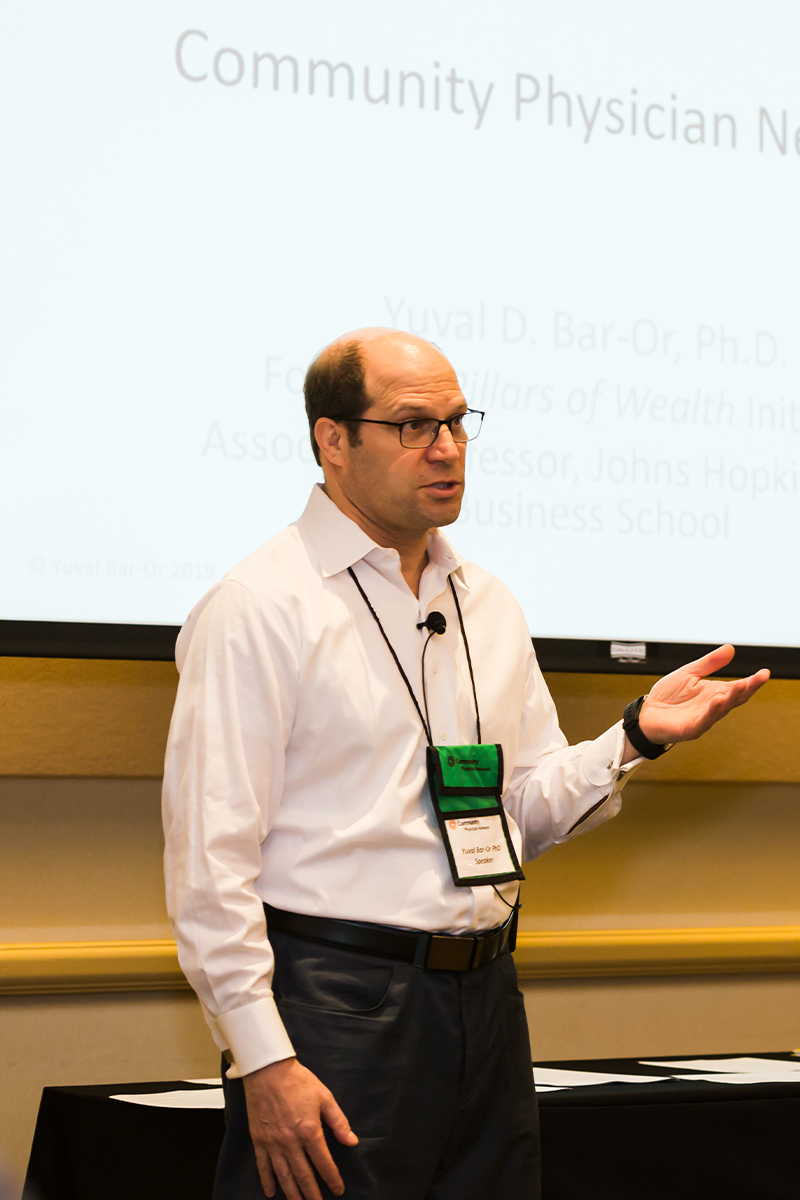 Yuval is an Associate Professor at the Johns Hopkins Carey Business School where he primarily teaches investments, wealth management, and corporate finance courses. He is the author of seven books, including the Pillars of Wealth series for medical professionals and Leveraging People for a Corporate Turnaround. In his first year at Johns Hopkins Yuval was awarded the Carey Business School’s Excellence in Teaching Award. He has since received the Dean’s Award for Faculty Excellence on multiple occasions.

Prior to joining the JHU faculty Yuval held senior strategy and operations roles with some of the world’s leading risk management firms. His roles included managerial responsibilities in New York, San Francisco, Toronto, London, Singapore, and Sydney, Australia. His risk management expertise assisted banks in managing over a trillion dollars in assets. He currently serves on the investment committee of a venture capital fund.

As a college student Yuval was a member of the varsity wrestling and rugby teams, and prior to that a provincially ranked gymnast. He was born in the USA and spent over a decade each in Israel and Canada. He enjoys jogging and kayaking, as well as scuba diving.

My father was a renowned physician, widely recognized as the world’s leader in his field of pediatric exercise physiology. With 200 peer-reviewed publications, he was a prolific researcher and popular lecturer who lived and breathed academic medicine. He was an old-fashioned doctor who cared deeply about doing good and was universally respected and loved by his family, students, staff and patients. He was also a very trusting and honest person, making him an ideal target for brokers, agents, and advisors pitching financial products and services. I estimate that his nest egg was reduced by about 25% due to (avoidable) losses and ill-advised (unnecessary) investments.

After his untimely passing at the age of 68 I watched my mother struggle. Like many women of her generation she’d left financial matters to her husband. Despite having an unusually strong support group consisting of many good friends she was losing sleep over financial decisions. Observing her struggles made me realize just how vulnerable physician families are. This led to a career change as I extricated myself from the world of financial risk management (effectively, I was a “physician for corporations”) and re-dedicated myself to improving financial literacy among medical professionals.

I began by writing books, then moved on to delivering workshops, participating in blogs, functioning as a consumer advocate and making media appearances. I even obtained the same licenses required of financial advisors so I could truly understand the business of retail financial services and the people providing those services (I have since allowed those licenses to expire). My personal voyage culminated in the Pillars of Wealth initiative, which in turn has one objective —  helping you, the doctor (and your family) to level the playing field.

The initiative is based on a simple premise: doctors completing training don’t know enough about finance, which makes them vulnerable. For many, financial decision making is neglected due to lack of time, lack of interest, and in some cases a sense of intimidation. In response many seek to outsource all financial decision making to a reliable financial advisor. In a perfect world this would be an ideal solution. In the real world some financial advisors are inept, some are conflicted, and some are outright dishonest. Are you able to distinguish the good from the bad? Are you sure your best friend, in-law, or work colleagues can help you do this reliably? The honest answer in most cases is “no.”

The safest solution for you is to gain more knowledge. This is where the Pillars of Wealth initiative comes in. Our content is designed by educators and scientists. We don’t sell financial products. Thus, when we offer education, you know without a shadow of a doubt that we mean it, because that’s all we do. Our only agenda is to educate you.

If you have any questions about financial literacy, please contact me.