Time Value of Money refers to the phenomenon that money tends to grow in value over time. It begins with the observation that a particular sum of money has different value or purchasing power depending on when it is received. Thus, a dollar received today is worth more than a dollar received a year from now, because I can take today’s dollar and invest it and at year’s-end I will have my dollar plus whatever interest I’ve earned.

While this very basic concept appears trivial, it’s far more momentous than most people realize. In fact, the time value of money concept is arguably the most important financial principle consumers of financial services must learn.

Let’s assume a dollar is invested at 6% interest annually, and all earned interest is reinvested over the course of ten years at the same rate of return. After 10 years the investment yields $1.79—a 79% gain. After another 10 years the compounded value is $3.2 (a total gain of 220%). If the interest rate is 8% annually instead of 6%, after 20 years the investment would be worth $4.66 (a 366% gain). This dramatic effect is attributable to interest compounding over an extended period. The details of such calculations are provided in the e-Book: Useful Concepts & Terminology.

Similarly, any stock and bond investments you make can be expected to appreciate in value over time. (Caution: “expected” is not the same as “guaranteed”). When you invest steadily each year, you are planting a new seed of growth with each cash injection. Each of those seeds grows and compounds. The longer you invest, the more dramatic the potential effect of compounding. This observation underlies the importance of beginning to save and invest as early as possible, because those early dollars have the most time to grow.

Note the steeper growth in later years (evident especially in the 8% growth case). This is where the benefits of compounding are strongest. In the early years the slope of the growth curve is shallow, indicating that as each year passes the investment grows modestly. But in later years, as each year goes by the total accumulation rises significantly, catapulting our nest egg to much higher values.

The rub, of course, is that we can’t “jump the line” to year 25 where the steep curve offers fast growth. We must begin at year one and steadily build wealth with every dollar we invest.

While the lower interest rate of 6% leads to lower total accumulation in later years, the patterns discussed in connection with the 8% curve are similar, although less dramatic. 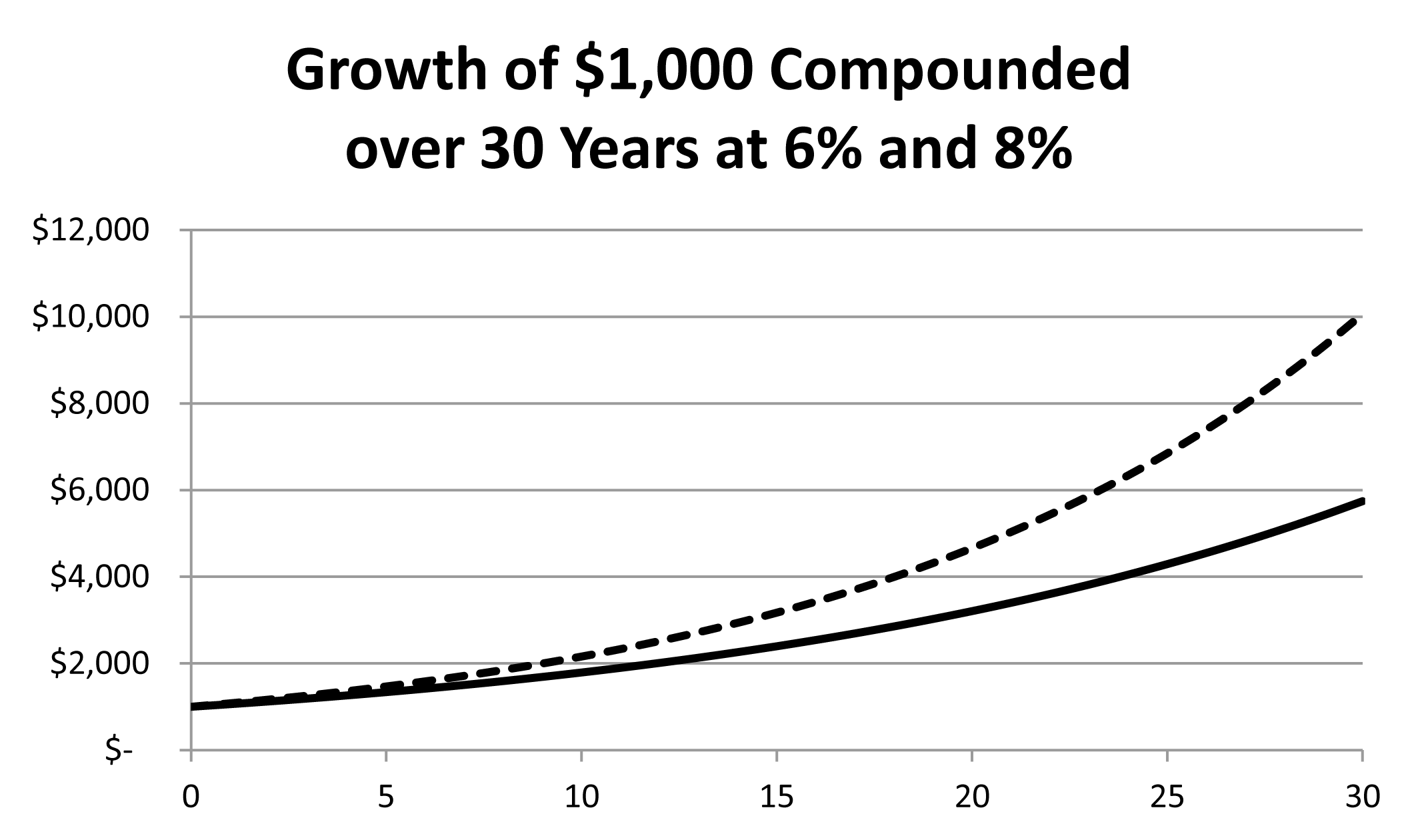 Suppose that first year you decide to buy a fancy coffee maker instead of investing $1,000. The loss to your future nest egg would not be $1,000. Rather, the decrease in your future nest egg would be the $10,000 that initial investment would have grown to. This emphasizes the point that dollars you set aside early are the most powerful in terms of growth potential. From a cumulative future next egg perspective, you’d be better off making that initial $1,000 investment and instead skipping the last seven $1,000 installments! Procrastination sets us back because it deprives us of compounded future benefits.

Even if you can only put aside small amounts in the early years, these small amounts have the potential to become large building blocks in your retirement nest egg in the future. In contrast, every day you delay making investing and other financial decisions is a day you can never have back.

We’ve just seen how powerfully time value of money can work in your favor when you invest. But it can work against you in several ways. One such example is when you borrow money, for example to finance your education.

As a resident or fellow you may elect to defer payments on education loans. While you don’t pay interest during the deferral period, that interest is instead being added to your total debt balance (in a process known as capitalization). Down the road, you’ll be paying interest on that accrued interest. The more the mountain of debt grows, the higher your monthly payments will be, and the longer it will take to pay off those loans.

Axiom: Your Greatest Enemy is Procrastination